Winners of the Stars4Media First Call for Initiatives announced 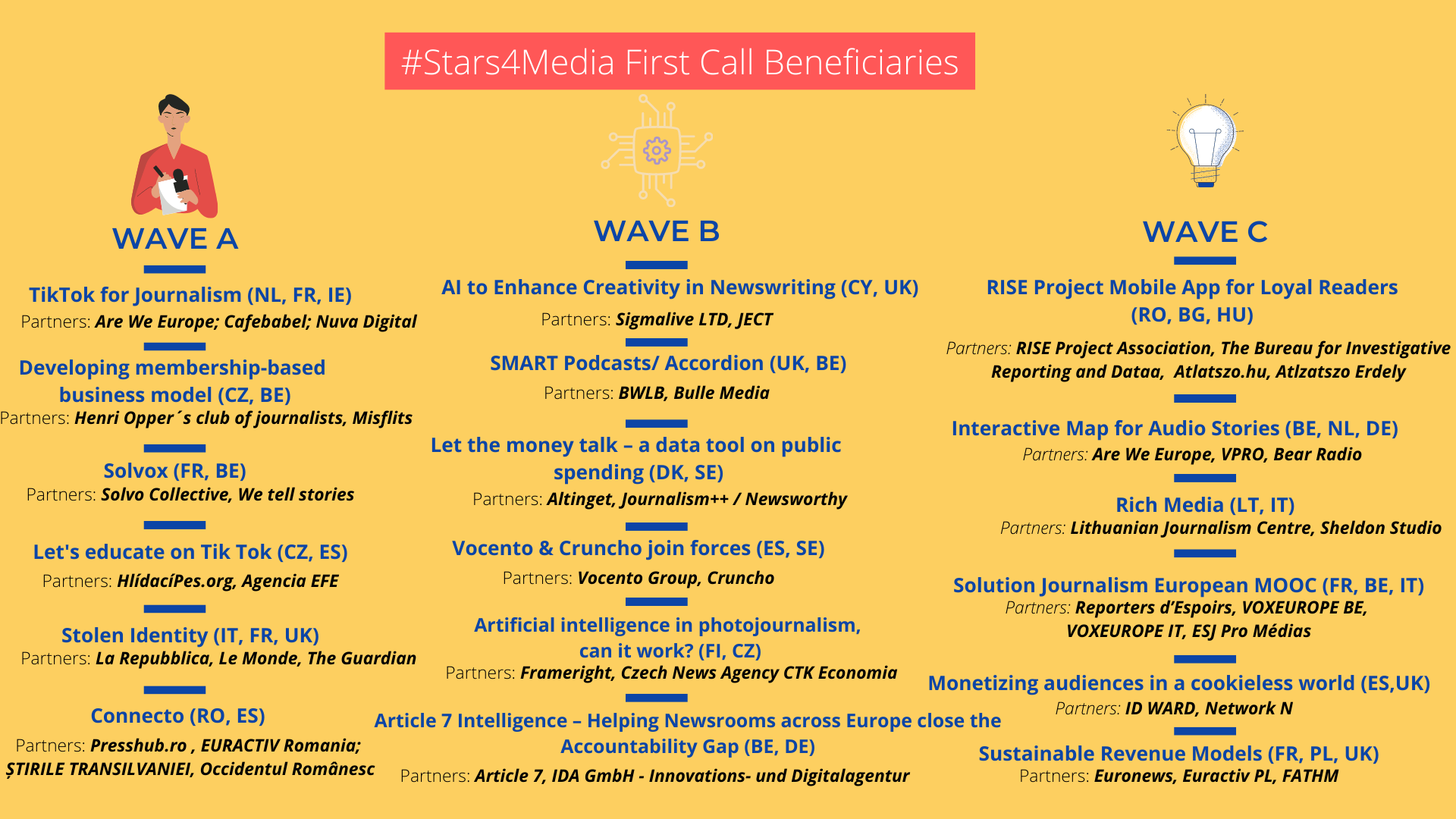 Stars4Media, the exchange and training programme for young media professionals, has announced  the winners of the First Call for Initiatives.

Concluded on 1 May, it gathered 330 media professionals from 150 media companies and start-ups, resulting in 82 proposals. Following the online pitching session that took place from 25 to 28 May, the jury has now selected the best. 18 proposals and 108 media professionals will continue their Stars4Media journey.

The proposals were evaluated for sustainability, longevity and innovation, among other criteria. They represent 60% of 30 initiatives and already 58% of 180 media professionals that Stars4Media aims to co-fund during the full year. Young media professionals interested in taking part can apply to the Second Call for Initiatives before 1 July, and may receive coaching for this.

Large media organizations exceeding 50 employees make 23,1% of total companies funded, including names like La Repubblica, Le Monde, The Guardian and Agencia EFE, among others. Micro and small companies with less than 15 employees are most represented, each accounting for 28,2%. Medium companies such as Bulle Media, Are We Europe, Reporters d’Espoir represent 20%.

In terms of geographical distribution, the majority of the selected candidates, 31%, come from West European countries, followed by the Eastern ones with 26,9%. Northern and Southern Europe represent 25% and 17% respectively. In terms of country division, many winners reside in France, Belgium, Czechia, the UK, and Spain. This is a wider country diversity than during the previous edition of Stars4Media. Women represent 35 % of selected beneficiaries.

The winning proposals are balanced around three key themes: journalistic trust; media, tech and marketing opportunities; and other innovations. The results prove once again that Stars4Media is unique in identifying, nurturing and fostering media innovation across borders.

‘The project called “Stars for media” is a great example of collaboration to develop innovative ideas’,stated European Commission Vice-President Vĕra Jourová in her speech at the Media4Europe Summit held on March 3rd 2021.

The programme grew significantly from its origin as an European Parliament pilot project.  During the #Stars4Media Lab , Anna Herold from the European Commission’s DG CONNECT highlighted the importance of collaborative journalistic partnerships.

Christophe Leclercq, initiator of Stars4Media, declared ‘For long lasting innovation to happen a more permanent framework for Stars4Media still has to be put in place. Perhaps as part of the NEWS initiative announced in December’s Media and Audiovisual Action Plan?’

Full list of 18 winning proposals. Congratulations to all the winners!