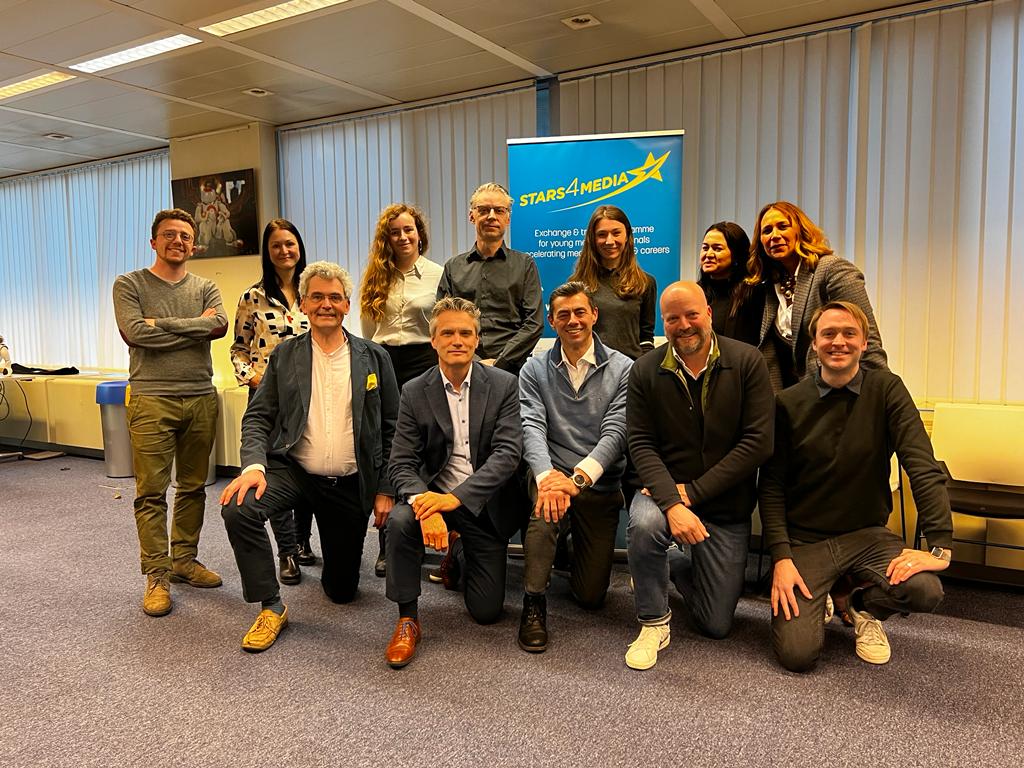 Policy-makers and field analysts have usually focused on capturing media innovation by looking at actionable outcomes and concrete, measurable results (usually connected to digital technologies) with an immediate market potential. However, a growing body of research has shown that the capacity of a firm to innovate is not only tied to meeting certain measurable technological standards. It is also associated with internal organizational processes, inter-departmental coordination and the company’s learning culture, all elements connected to non-linear, iterative processes, that reap the potential of knowledge exchange and cross-fertilization of competences. This policy brief presents findings from the Stars4Media project. The findings show how cross-disciplinary and cross-border collaborations centered around skill-growth and knowledge exchange have been perceived by European media companies as a long-lasting advantage point in their search for innovation, and it is to be further supported.

In the last three decades the European media sector has been striving to survive different challenges: global competition, the imperatives of digital transformation, the global financial crisis and more recently the COVID-19 pandemic. With audience behavior and revenues sources shifting continuously, a recurring response of the sector has been the quest for innovation.

This response has been supported both by media companies’ internal policies, as well as through the external support of institutional actors, for example with innovation schemes and programmes. At the EU level, the Stars4Media programme is an example of a European media innovation support scheme. Since 2019, Stars4Media has been coordinated by SMIT and it is currently running its third edition, Stars4Media News.

Recently completed, the Stars4Media Second Edition was implemented between January 2021 and June 2022. While the concept of the programme hardly changed compared to the First Edition, more ambitious targets were set and achieved. Stars4Media Second Edition has enabled a higher number of cross-border initiatives (short-term projects) between media outlets, and it has supported financially almost as double as the media professionals of the previous edition. 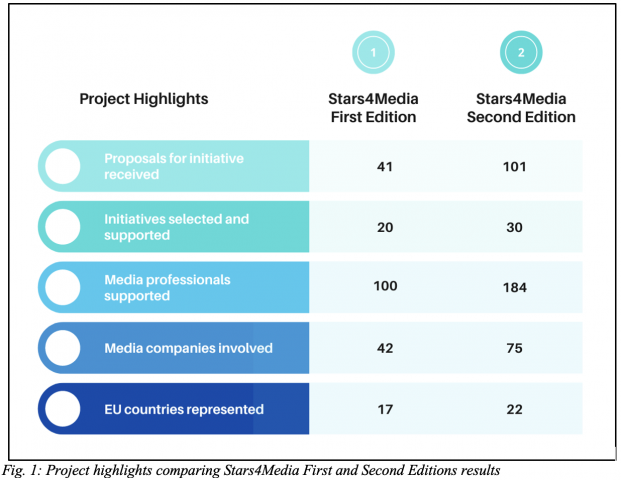 The main project goal is the development of innovative products/methodologies and the cross-fertilization of skills and competencies have remained the core. Typically, two media companies or a media company and a technology startup from two different European countries worked together for four months on a joint project. Aside from allowing companies to achieve some concrete proofs of concept, Stars4Media makes a critical point when it comes to challenging the traditional outcome-oriented media innovation policy paradigm.

A recent survey by Reuters Institute for the Study of Journalism has shown how media companies attribute a key role to innovation, for handling the multifaceted challenges the industry faces today. When it comes to identifying the barriers to innovation, the same report noted, next to a rather predictable shortage of financial resources, a lack of skills in delivering and defining solutions in the EU media sector and a lack of organizational strategy. Media innovation programmes such as Stars4Media precisely tackle this need, by providing companies with a safe space for experimentations, testing, learning opportunities and skills growth.

As part of Stars4Media, different types of media companies were given time, guidance, and resources to experiment with explorative out-of-the-box ideas, sharing respective know-hows and competences. As field experts expect further uptake of subscription-based models, artificial intelligence continuing to make inroads in newsrooms, podcasting consolidating its position and social media platforms to remain important in the media context, there is clearly much need for exploratory experimentation and fine-tuning of internal processes and products already tested out.

There was a wide variety of synergies in the initiatives co-financed by Stars4Media Second Edition, which aimed to capitalize on positive trends like those aforementioned in the industry. These included, amongst others, initiatives exploring TikTok’s potential as a tool for use in journalism, audience solutions for the podcast market, experimental local journalism products, and many relating to the use of artificial intelligence for media production and audience interaction.

As mentioned above, two of the biggest obstacles to innovation are the lack of skills to deliver solutions and the poor alignment between departments and groups within media companies. Stars4Media addresses these challenges by encouraging companies to work with partners with complementary skills and test out collaborative workflows.

Out of the seventy-six media companies participating in Stars4Media Second Edition, nearly half of the team leaders reported that thanks to the initiative, their team expanded their skill set or competencies greatly.

Furthermore, almost half of the team leaders said that the skills that they have internalized as a result of this project will significantly improve their ability to implement innovations in the future. More interestingly, data was cross-tabulated to observe the association of different variables. 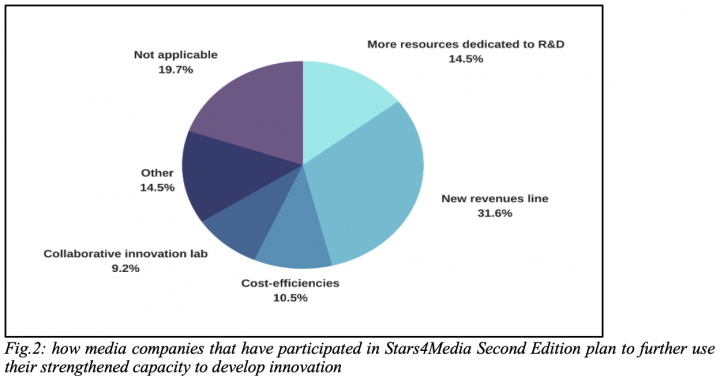 With the facilitation of cross-border collaborations being at the heart of the Stars4Media project, it is perhaps unsurprising that more than half of the participants (56%) reported that the main benefit resulting from their participation in Stars4Media was that it strengthened their ability to partner in future international projects. While participants reported equally strong skill growth in project management, editorial and technological competencies, only a small number said that their business or sales skills had improved as a result of their participation in Stars4Media.

The survey also shows how editorial innovation, and the creation of new services were the most achieved types of innovation, less was done in terms of tech innovation and revenues creation, and very little was achieved in terms of external/internal restructuring of the companies themselves, making the case for a much needed support for newsroom transformation. Looking specifically at this last result, the third edition of Stars4Media – titled Stars4Media NEWS – comes quite timely, with its focus on business and newsroom transformation.

Conclusions and recommendations: how to maximize innovation while collaborating?

On top of the survey to the 76 team leaders, a round of qualitative interviews with 20 team leaders was also performed between February and April 2022. The combination of quantitative (survey-based) and qualitative (interview-based) insights allows to gather a set of lessons learned to build upon for the continuation of the Stars4Media project and for informing industry leaders, policy-makers and academics.

Giordano Zambelli is a PhD student at imec-SMIT-VUB and he is currently conducting academic research on the interplay between collaboration and innovation in the EU media sector.

The academic research conducted on collaborative innovation practices is based on the ongoing experience of the Stars4Media project, which is implemented by imec-SMIT-VUB since 2019.

Luciano Morganti is project coordinator, Catalina Dumbraveanu is project manager and Olivier Braet is responsible for the evaluation of the project. Conor Murphy is a former student of the New Media and Society in Europe Master and he has contributed to writing this policy brief during his traineeship at imec-SMIT-VUB

I am fascinated by the adaptation of news media to an increasingly digital-first world, looking at how the media industry is testing solutions to innovate while readers are discovering new ways to consume news. In a time of experiments and question marks I find it intriguing to understand whether and how policy makers can influence […]

I am intrigued by the interaction between (new) communication technologies and democratic processes. I like to think and reflect upon the concept and idea of the Public Sphere and in particular of the European Public Sphere. My present research and attention are dedicated to social, political and communicative aspects of citizens’ participation, citizens’ empowerment and […]

The most important bottlenecks for the adoption of new technologies are never only technological. Just as often, they depend on the industrial forces on the supply side, and shifting consumer preferences on the demand side. One of my main concerns is understanding how various industrial forces such as strategic behaviour or business model choices can […]