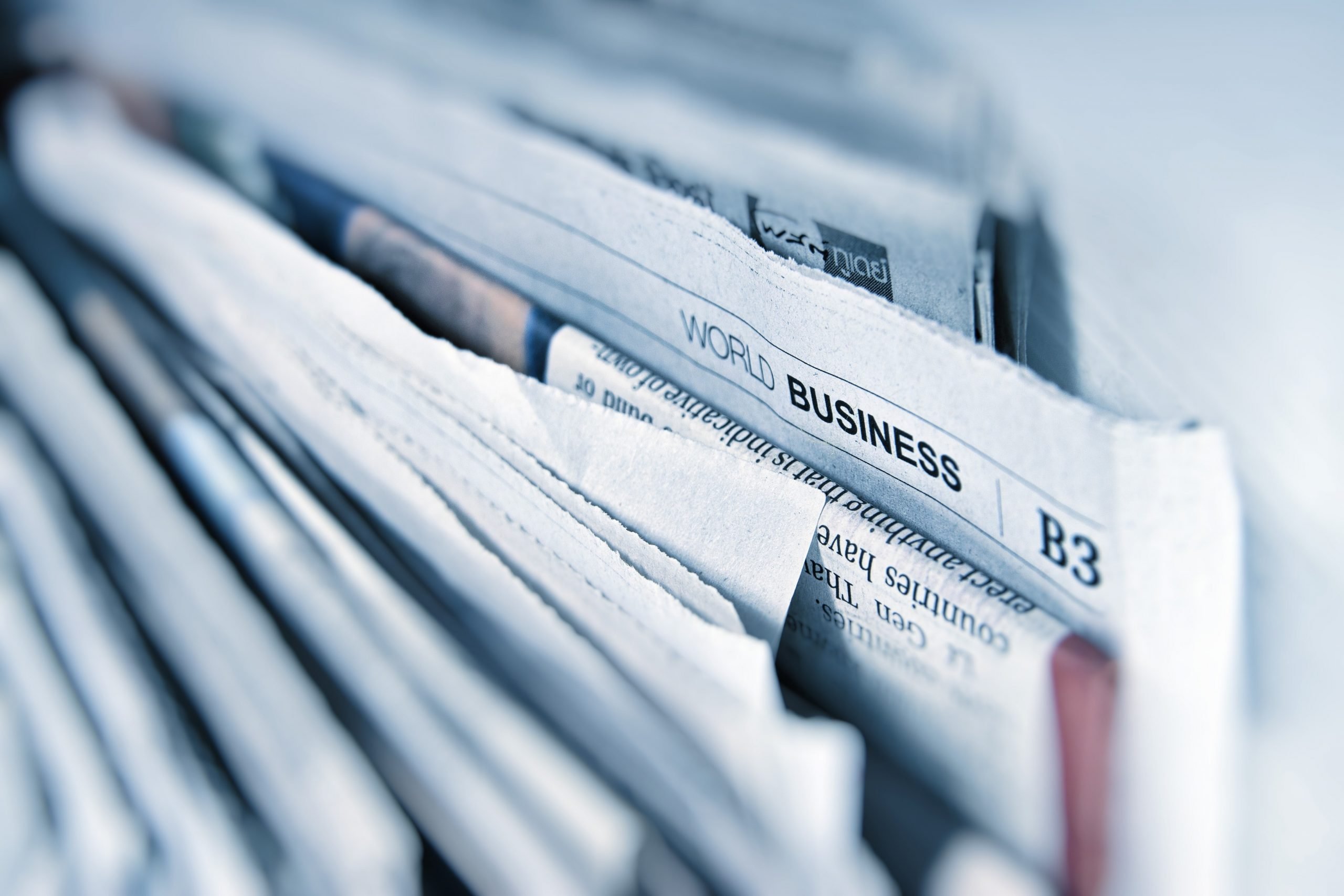 Today, the Reuters Institute for the Study of Journalism publishes its yearly Digital News Report, for which imec-SMIT is the Belgian partner. In this latest edition, we summarize the main findings on Flemish news use in 9 key trends. What is the state of trust in news as we exit the pandemic? Which news sources do Flemish news users rely on in 2022? And do news users feel that journalists work to the benefit of society, or their own political and commercial interests? This policy brief provides you with an answer to these questions and more.

Interested in how to move forward based on these results? Take a look at the CONVERSATION STARTERS at the bottom of this document.

Want to know how these findings fit within the past evolutions in news use? Be sure to check out our updated NEWS MONITOR.

Online and television news have been grappling with one another for the top spot as main news source over the past years. In 2022, online news has regained its position as most important news source. Radio and print in particular declined steadily since 2017, but seem to have bottomed out in recent years as both feature as the main source of news for only a small minority of Flemish respondents.

Looking at the different age groups, it is noticeable that the strongest decline of television as main source is among the younger generations. While television news might have functioned as an important anchor point to keep abreast of coronavirus news during lockdown, on par with older news users, younger generations have returned to online news (including social media) as their most important source. Similar shifts can be traced among respondents with a low income and/or education. 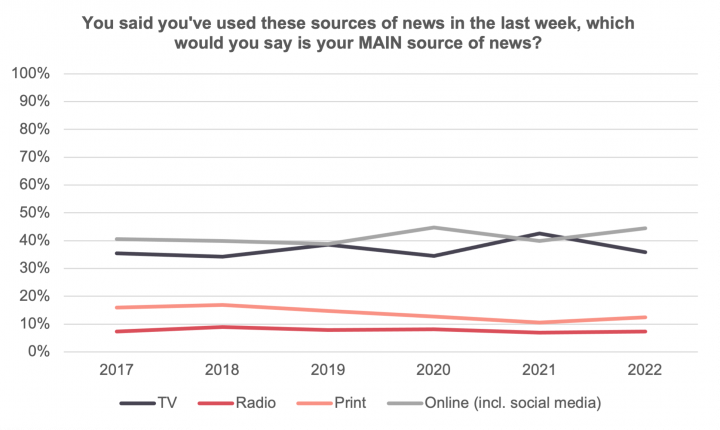 News avoidance remains a timely subject in news consumption. In 2017, 48% of Flemish news users indicated avoiding the news sometimes, occasionally or often. By 2022, 64% of Flemish news users indicate they avoid the news to varying degrees. Low and middle educated, as well as younger age groups, appear to be more likely to avoid news than others.

Despite an increase in news avoidance, research has argued that occasional news avoidance might fit within a healthy news routine and functions as a coping mechanism when news users feel overwhelmed or strained mentally. Indeed, for occasional news avoiders, the negativity of news as well as an overload of coverage on politics and COVID-19 feature as the main motivations for their avoidance practices. However, a different story unfolds for frequent news avoiders. For these news users, a lack of trust in the news features as the third most important factor in their avoidance of news, hinting at a deeper, structural problem that causes these news users to turn away from the news. 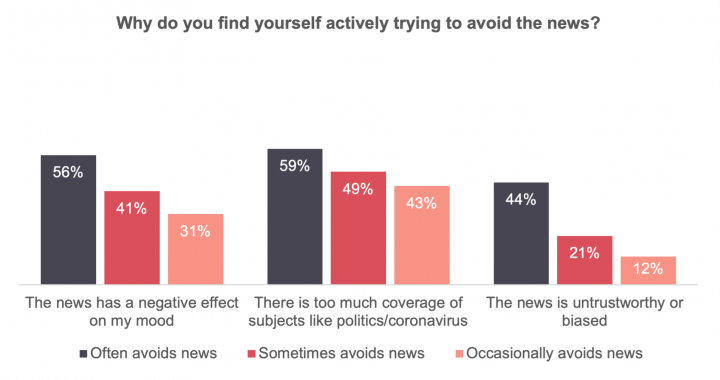 When it comes to their main motivations to consult the news, Flemish respondents are mainly looking for news that has personal relevance and purpose (47%). The news should therefore be relevant and/or related to the daily life of the news user. Obtaining information that makes them learn something new or provides background information on current affairs and societal issues is an important reason for approximately one third of the Flemish respondents and comes in second place.

However, the social aspect of news features prominently as well, as respondents that consulting the news is also aimed at having something to talk about or share with family, friends, and colleagues. Lastly, a fair share of Flemish respondents (29%) considers it their civic duty to be informed, highlighting how news consumption functions as a person’s window to the world that allows them to stay informed on their immediate and broader living environment.

After a marked increase during the pandemic, the number of news users that indicate they trust the news in general declines slightly in 2022 to 57% (-4 points). Still, trust levels remain higher than they were before the pandemic. Trust levels in Flanders are on par with those in The Netherlands (56%), Norway (56%) and Denmark (58%), while those in Wallonia are closer to Poland (42%) and Austria (41%), and remarkably higher than France (29%). 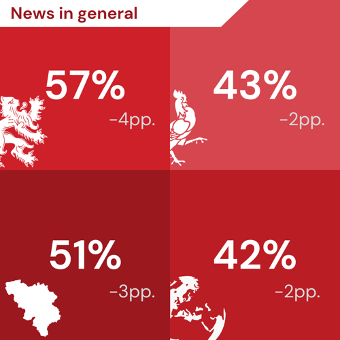 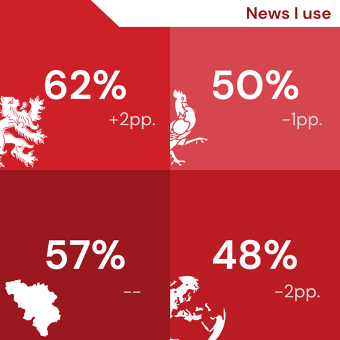 Time will tell if the pandemic meant a rallying cry for trust in news, or if this year’s results mark the continuation of the steady decline in trust in news that preceded the global health crisis.

Still, trust levels in the news that respondents use themselves remain high, creeping up to 62% of Flemish respondents (+2 points). The broad trust that the Flemish news landscape was  afforded during the pandemic might be dissipating as distrusting news users are increasingly folding back unto a more limited range of news sources and news repertoires are becoming less diversified.

Lastly, the dip in trust levels occasionally appears to go hand in hand with an increase in distrust. Especially among lower income (+12 points) and to a lesser extent among self-identified right-wing news users (+4 points), distrust levels have risen in 2022. As a result, the Flemish news landscape is becoming increasingly marked by several trust (and distrust) gaps. What’s more, the new income-based distrust gap might reflect a broader decline in trust in institutions among lower income groups that struggle with the rising cost of living and energy prices in Belgium since mid-2021. 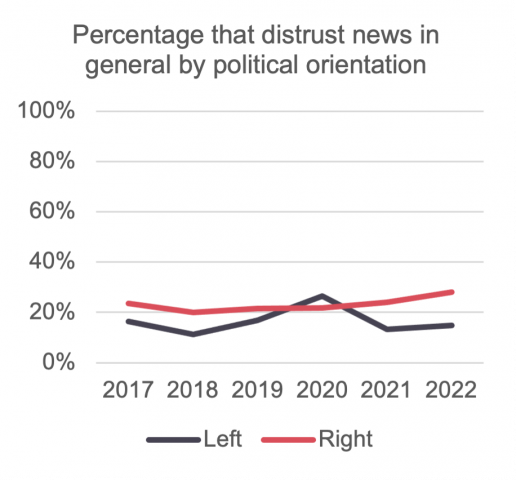 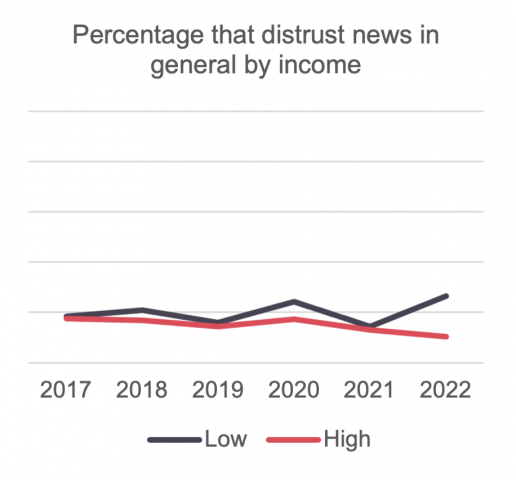 Just as we noted that general trust levels have started to dip again, we note a decline in the percentage of news users that indicate their trust in Flemish news brands in 2022. As a result, trust levels for Flemish news brands appear to have returned to the level they had attained before the coronavirus pandemic. However, trust gaps between news users with a left- and right-wing political orientation continue to grow. While trust in news among left-wing news users returns to a pre-pandemic state, trust in news brands among right-wing users continued to decline throughout previous years. 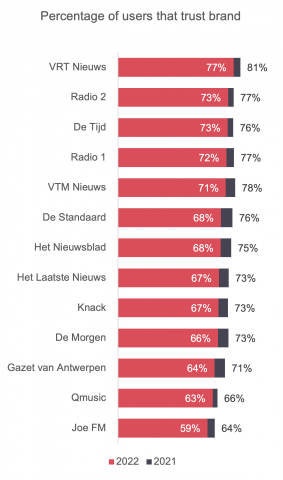 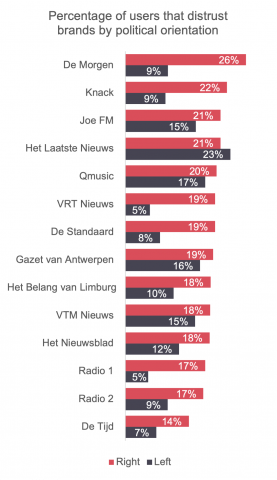 Additionally, a more pronounced distrust in Flemish news brands has taken root. The number of news users with a distrust in Flemish news brands has increased in 2022, in particular among ‘right-wing’ news users. Certain news brands are polarising between left-wing and right-wing oriented news users in terms of trust. This is most clear in the comparison of the two most commonly used online news brands in Flanders: Het Laatste Nieuws and VRT NWS. While we find that the level of distrust is more or less the same amongt left- and right-wing users for Het Laatste Nieuws, we find a significant (dis-)trust gap among left- and right-wing news users for public broadcaster VRT Nieuws. As a result, while VRT NWS is the most trusted news brand in Flanders, it is also one of the most polarising in terms of distrust. More concretely: 19% of Flemish respondents that self-identify as right-wing distrust VRT, compared to only 4% of left-wing respondents. 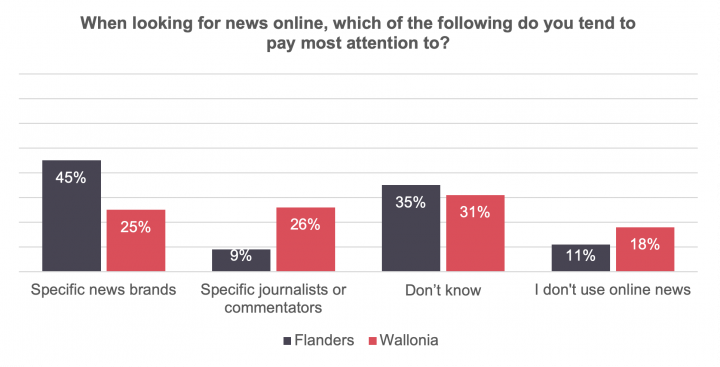 The figures of Wallonia show a strikingly different story. When consuming news, the French-speaking news users pay more attention to specific journalists (26%) than to specific news brands (25%). A possible explanation are the rather large differences in media culture between the North and South of our country, where we see more journalists attaining star status.

The COVID-19 pandemic was accompanied by a peak in paying news use. What’s more, the latest data cautiously suggests that the covid-bump in payment for news in Flanders might outlast the pandemic, contrary to the generall trend in the worldwide survey of overall growth levelling off. 18% (+2 points) of the Flemish respondents paid for online news in the last year. At a time where news organisations struggle to attract younger audiences, it is encouraging to see that in Flanders especially the younger generation is the driving force behind paying for online news. 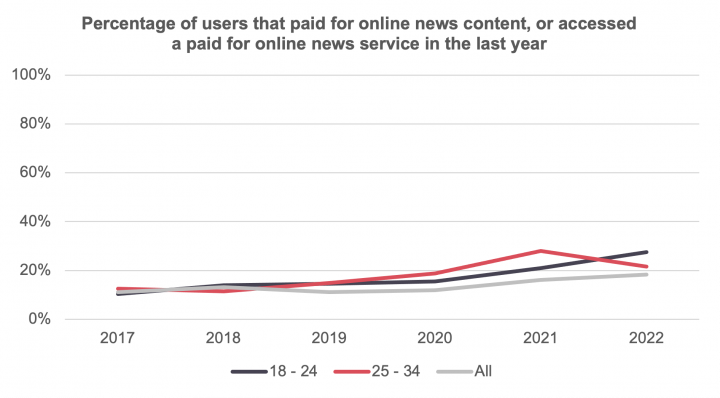 That a majority of Flemish news users trusts news in general does not mean that they trust all news, all of the time. In general, an equal number of Flemish respondents are more critical and are more confident of news media putting what is best for society ahead of their commercial or political interests. Close to a third state that all or most news organizations put their own commercial or political interests ahead of what is best for society and close to a third states the opposite.

Perhaps unsurprisingly, a critical attitude towards news organsiations strongly aligns with whether news users either trust or distrust the news. When we take a closer look at these attitudes, we find that among those who trust the news in general, 37% believe that journalists put society first. Meanwhile, among news users who distrust the news in general, half of them believes that journalists serve their own commercial and political interests above all else.

These results also show that even among those who trust news in general, opinions are hardly uniform when it comes to the question whether news organisations put society ahead of their own interests. 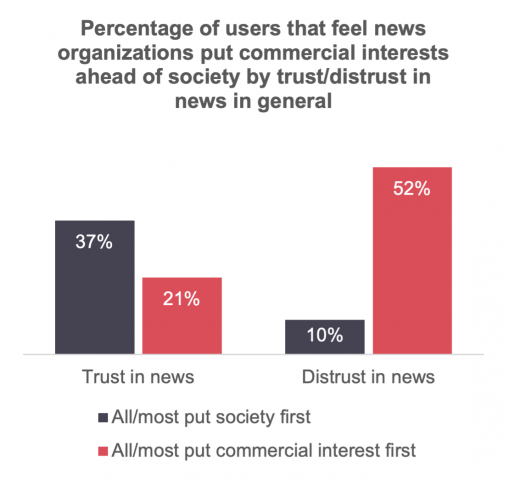 Most Flemish respondents (55%) believe that news organisations are politically close together rather than far apart (26%). However, while a clear majority of Flemish news respondents does not consider the news landscape to be polarized in general, certain news sectors seem more politically differentiated. News users that mainly rely on print news sources experience more polarization in the news landscape than others, potentially pointing to the legacy of a newspaper market that used to be heavily pillarised until far into the 20th century. 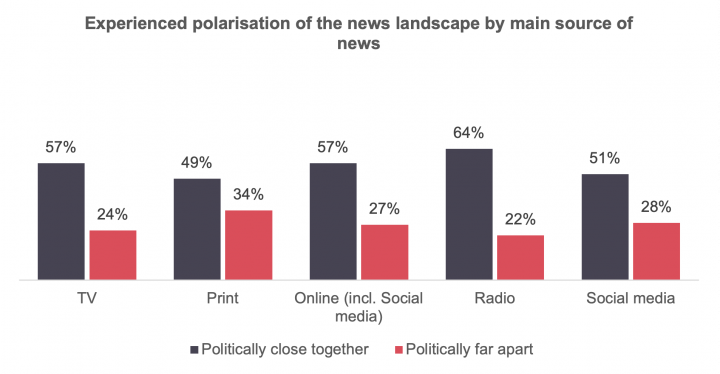 Now that we have updated you on the most important trends in news use of the past year, we present 3 conclusions to spark the discussion. Want to continue the conversation? Be sure to visit Nieuwsgebruik.be for more data and findings on news use in Flanders.

Ruben Vandenplas is a PhD Researcher at imec-SMIT-VUB’s Journalism, Trust, and Participation unit. His research is focused on everyday media use and participation in a cross-media landscape. Ruben.vandenplas@vub.be

Pauljan Truyens is a PhD Researcher at imec-SMIT-VUB’s Journalism, Trust, and Participation unit. His research focuses on the role(s) of journalism in the daily lives of users. Pauljan.truyens@vub.be

Sarah Vis is a PhD Researcher at imec-SMIT-VUB’s Journalism, Trust, and Participation unit. Her research focuses on the changing role of cultural journalism and critics in a digital media landscape. Sarah.vis@vub.be

Jonathan Hendrickx is a Postdoctoral Researcher at imec-SMIT-VUB’s Journalism, Trust, and Participation unit. His research is focused on news diversity and new forms of news production, diffusion and consumption. Jonathan.hendrickx@vub.be

Ike Picone is associate professor of Media and Journalism at the Department of Communication Sciences and heads the unit on Journalism, Trust & Participation within the Media & Society program of the imec-SMIT research group. Ike.picone@vub.be

Nieuwsgebruik.be is the foremost gateway to cutting-edge research on news consumption patterns. Guiding you through the latest data on news use to bring you all of the insights, with none of the fuss.

Photo by AbsolutVision on Unsplash