Policy Brief #49: 9 major ways in which the pandemic has marked Flemish news consumption 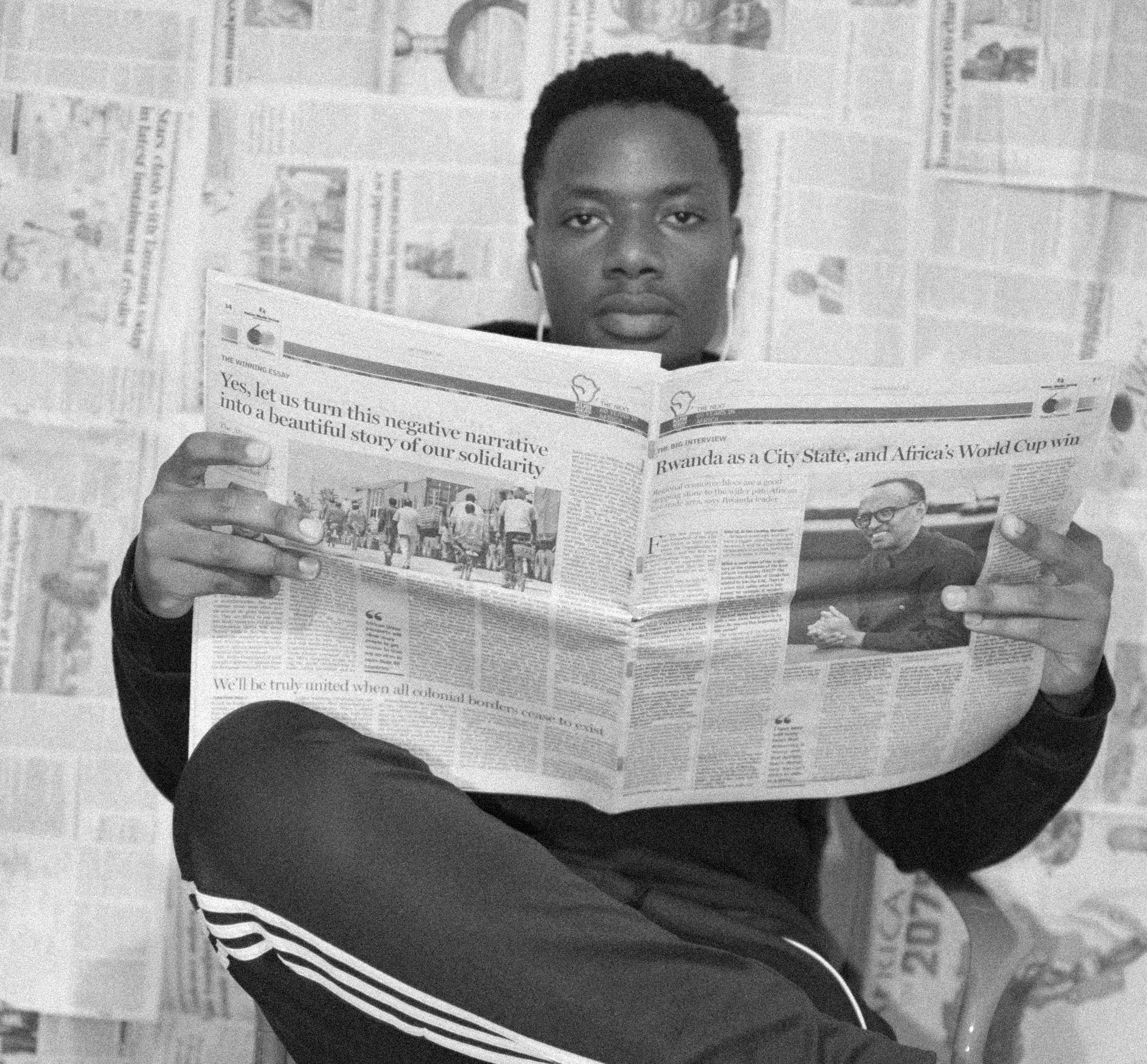 
Today, the Reuters Institute for the Study of Journalism publishes its yearly Digital News Report, in which imec-SMIT is the Belgian partner. This year, our analysis shines a spotlight on the impact of the coronavirus pandemic on news use in Flanders. In this policy brief, we will guide you through 9 MAJOR WAYS in which the pandemic has marked Flemish news consumption in 2021.

Interested in how to move forward based on these results? Take a look at the CONVERSATION STARTERS at the bottom of this document.

Due to the spread of disinformation related to the coronavirus and the vaccines that are supposed to protect us against it, the past year has presented Belgium with its first major wave of digital disinformation. The numbers speak for themselves: Flemish news users were substantially more confronted with false or misleading information about the coronavirus (36%) than on any other topic.

This was even higher amongst the younger groups: around 45% of news users under 35 years old indicate that they have been confronted with disinformation about the coronavirus in the past week, compared to only 30% of those aged 45+. This may be due to the higher use of social media for news among the younger generations.Politicians appear to be the subject of most concern as a source for fake news on COVID-19. More than 1 in 4 Flemish users reported being concerned about politicians as a source of fake news related to the coronavirus, which is substantially higher than those concerned about disinformation coming from ordinary people, journalists and celebrities. Remarkably, amongst the 18 to 24 year olds not politicians but ordinary citizens are regared as the most mistrusted source of coronavirus news.

2.   INTEREST IN NEWS GROWS, BUT SO DOES NEWS AVOIDANCE

The pandemic appears to have sparked a higher interest in news. But despite what one might expect based on the early boost in reach that most Flemish news media benefitted from during the pandemic, the overall number of users that consumed news on a weekly basis has declined by roughly 3,5% in 2021. This coincides with what appears to be a slight increase in news avoidance, as the number of users that use news less often than once a month has grown by 4%.

Looking at the entirety of media that Flemish users consume on a regular basis, we find that users have begun to significantly change their news routines in the wake of the pandemic. This is noticeable in the shifting proportions of people that make use of a specific news repertoire. Broadly speaking, the amount of Flemish news users that consume news sparsely and casually from different sources (casual news repertoire) has increased in 2021. Specifically, the number of higher-educated news users who used a broad range of news sources intensively (panoramic repertoire) appears to have shrunk in 2021. This might be an indication that users have trimmed down their news use in favor of more tempered news habits during the pandemic. In contrast, lower-educated news users predominantly consumed news sparsely from a limited number of sources (limited repertoire) in 2020, but now feature more casual (+5 pp) and even panoramic repertoires (+4 pp).

The interest in the televised press conferences of the National Security Council appears to have shifted the primary sources that Flemish news users consulted during the past year. Television news use grew by roughly 8% since 2020, solidifying its place as the most important source for news during the pandemic. Despite the possibility for online news media to provide users with a constant stream of news and information, online news use shrunk during the pandemic, connecting to a broader shift towards more selective news use patterns during the pandemic (described Error! Reference source not found.). Lower and middle education and income users in particular exhibit the most noticeable turn towards television as their main news provider.

Flemish news users have turned away from social media as news providers in 2021. This trend is particularly noticeable for young news users (18 to 24 years old), which relied most on social media for news consumption in 2020. The decline in social media news use coincides with a general move towards direct, branded access rather than side-door access as their main way to access news. Information overload is often considered an important factor in news avoidance. In the tumultuous news environment of the pandemic, operating at a high velocity and rife with fake news (especially online), this might explain why a higher number of Flemish news users engage with the news on their own terms.

The coronavirus pandemic appears to have reignited trust in news with Flemish users. Roughly 61% of Flemish news users indicate they trust news in general, up roughly 10% from 2020. Trust in news on social media, however, stagnates at 19%. Despite the general rise in trust, significant differences in trust remain between Dutch- and French-speaking Belgians.

Trust scores are measured via a 5-point Likert scale where a score of 1-2 is recoded as distrust and 4-5 as trust.

Legacy news brands are increasingly perceived as reliable news sources by Flemish news users during the coronavirus pandemic. In line with the more general growth in trust described Error! Reference source not found., Flemish news brands have marked a growth in trust across the board. Popular news brands in particular saw the biggest uptick in trust, including JoeFM (+6,5%), Het Laatste Nieuws (+6%), and Qmusic (6%). Connecting to the renewed importance of television as a source of news in Flemish media repertoires during the pandemic, public broadcaster VRT and commercial broadcaster VTM spearhead the lineup of most trusted news brands in 2021. 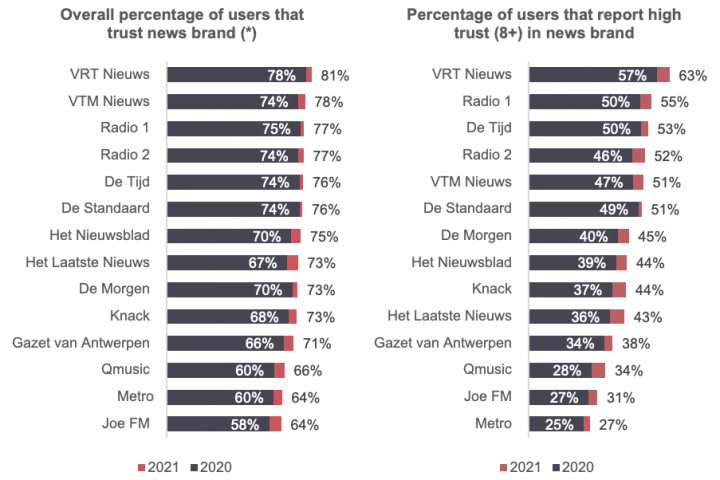 Although quality news brands such as VRT, De Tijd, De Standaard, and De Morgen see less growth in the overall percentage of users that indicate trust in their brands, quality news brands excel as trustworthy news sources during the pandemic. VRT News in particular solidifies its place as a beacon of trust in the past year, as 63% of Flemish news users afford VRT Nieuws a trust score of 8 or more. In comparison, popular news brands such as JoeFM or Het Laatste Nieuws are afforded a score of 8 or more by respectively 31% and 43% of Flemish news users.

In the past year, the majority of the Flemish audience went looking for reliable news to stay up to date on the evolution of the coronavirus pandemic. However, the considerable shift towards national and local news did not result in a significant change of mind towards paying for (online) news. 16% of Flemish news users indicate they have made some sort of payment for (online) news during the past year, an increase of 5% since 2020. In comparison, approximately 80% of Flemish news users has refrained from paying for (online) news entirely.

The minority of those who paid for news in the last year does this in a slightly different way in comparison to 2020. Ongoing payments (monthly or yearly) still is the preferred way of more than 80% of the Flemish users. Less traditional payment methods, such as paying per article or making a donation, are gaining popularity among the younger generations. Especially highly-educated millennials are casting themselves as early adopters of these alternative payment methods. Remarkably, getting access to news via someone else’s subscription dropped 14%.

Flemish users who pay for 3 or more news providers has nearly doubled during the pandemic. This can also be ascribed to the youngers news users. A small group of highly interested news consumers decided to broaden their newsdiet in the past year, looking for qualitative, reliable news from a set of diverse sources.

Despite a general decline in news participation, young news users (18 to 24 and 25 to 34 years old) remain the most active news participators. Unsurprisingly, as most of the year was spent in lockdown, talking about news with friends and colleagues during face-to-face conversations has dropped significantly in 2021. However, this doesn’t mean that this activity has been moved online. Online participation has declined in 2021, perhaps further highlighting how Flemish news users adopted more selective patterns of news consumption.

This shift in participation in news is especially noticeable with users of a right political orientation. In 2020, ‘right-wing’ users appeared to be the most active participators in news by far, with 53% indicating they participated in news online during the last week. During the pandemic, a significant number of right-wing users has stopped participating in news, as 50% now indicates they did not participate in news at all (up from 36% in 2020).

Now that we have updated you on the highlights in news use in the past year, we leave you with 4 conclusions that are meant to spark the discussion on how to move forward with these results. Want to continue the conversation? Be sure to visit Nieuwsgebruik.be for more data and analysis on news use in Flanders.

Ruben Vandenplas (Ruben.vandenplas@vub.be) is a PhD Researcher at imec-SMIT-VUB’s Journalism, Trust, and Participation unit. His research is focused on everyday media use and participation in a cross-media landscape.


Pauljan Truyens (Pauljan.truyens@vub.be) is a PhD Researcher at imec-SMIT-VUB’s Journalism, Trust, and Participation unit. His research focuses on the relationships between users and media, with a focus on news.

Sarah Vis (Sarah.vis@vub.be) is a PhD Researcher at imec-SMIT-VUB’s Journalism, Trust, and Participation unit. Her research focuses on the changing role of cultural journalism and critics in a digital media landscape

Ike Picone (Ike.picone@vub.be) is associate professor of Media and Journalism at the Department of Communication Sciences and heads the unit on Journalism, Trust & Participation within the Media & Society program of the imec-SMIT research group.

Nieuwsgebruik.be is the foremost gateway to cutting-edge research on news consumption patterns. Guiding you through the latest data on news use to bring you all of the insights, with none of the fuss.

[Photo by ian maina on Unsplash]

Ruben Vandenplas is a doctoral candidate at imec-SMIT-VUB and researcher at the Flemish Knowledge Centre on Culture and Media Participation. His doctoral thesis explores the everyday media practices of Flemish users in the current crossmedia landscape.  His research delves into the concept of ‘media repertoires’ through both quantitative methods (including descriptive, cluster, and regression analysis) […]

Sarah Vis is a doctoral candidate at imec-SMIT-VUB since 2019. She’s a member of the Media and Society program and connected to the Journalism, Trust and Participation unit. Besides her research trajectory, she works as a teaching assistant at the department of Communication Studies at the Vrije Universiteit Brussel.    Her doctoral thesis explores how the […]