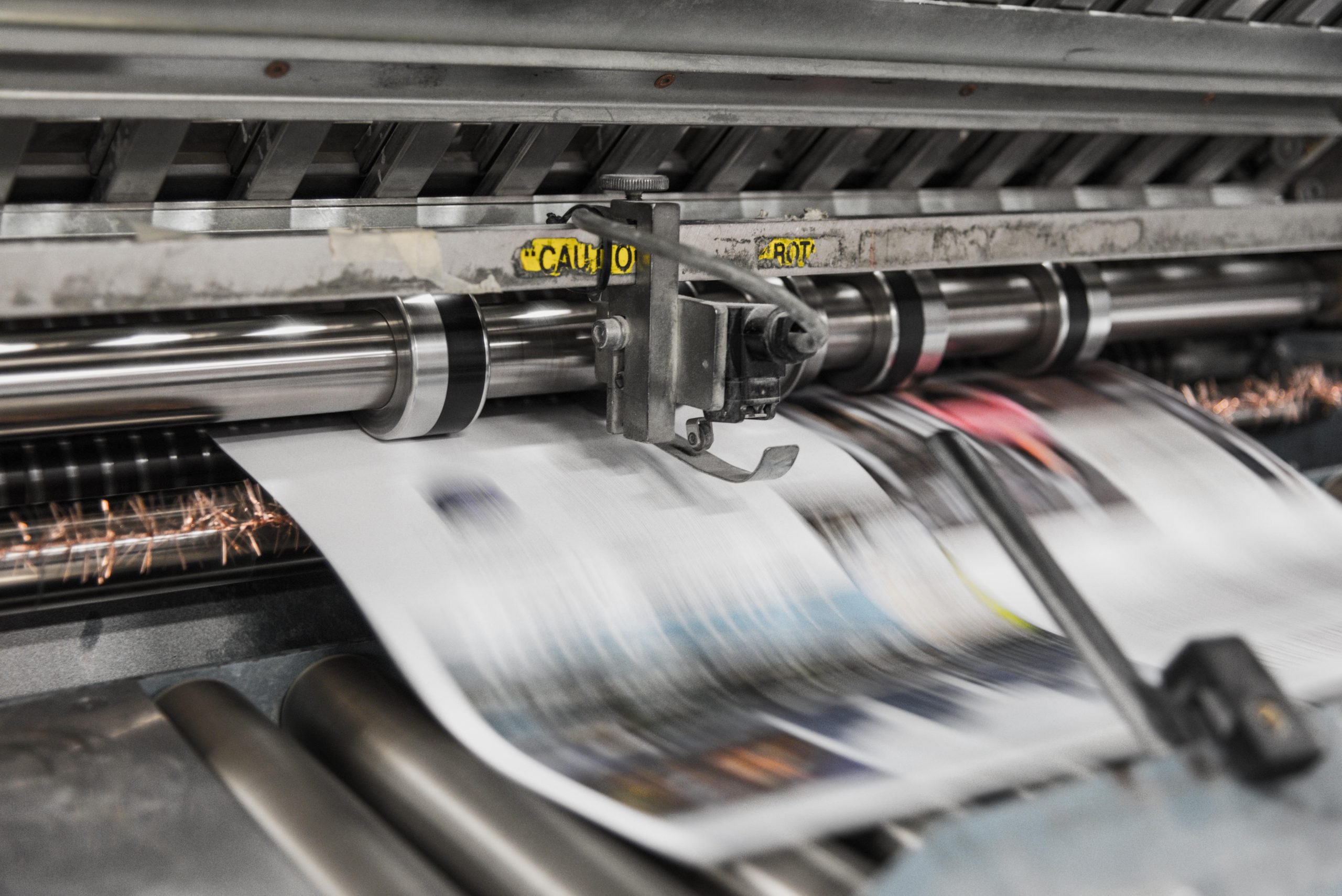 The European press sector has been considerably disrupted through behemoth technology companies like Amazon, Facebook, Google, Apple, and Microsoft. With the upsurge of technology companies and them entering the press sector, European newspaper publishers have been introduced to a new “competitor” in the market: news aggregators (e.g. Google News, Apple News, Microsoft News), which collect and organize pieces of information in a specific manner from newspaper publishers. The influx of such services has sparked so much change in the sector in several European countries (including for example Spain), where policy makers have taken action to confront these companies. The goal of this White Paper is to explore how newspaper publishers can better navigate this technology dominated sector in the future.

The press sector has been influenced in almost every aspect of their production chain by technology companies: for example, Google provides funding to European newspaper publishers through Google News Lab and Google News Initiative, where the latter has announced a contribution to European news media of €150 millions. Similarly, Facebook founded the Facebook Journalism Project, which is an education initiative for prospective journalists. Both Google and Facebook also provide newspaper publishers with tools to monitor their content’s performance.[1] These are examples of how technology companies have impact on the news sector in terms of for example how newspaper publishers can depend on them in terms of reaching their audiences and become part of the education of journalism.

Additionally, news aggregators have started to permeate the press sector specifically by making news content searchable and bundle them. News aggregators apply (automated) Web searches resulting in relevant articles on specific topics ranging between three overarching types: fully automated (e.g. Google News), mostly human-edited (e.g. Huffington Post), and the ones that work in a combination of the two above-mentioned types (e.g. Techmeme). All considered, news aggregators pose a threat to newspaper publishers at “the very heart of the economic arrangement for news: Who will underwrite the original creation of news reports?”, as Chyi et al. (2016) puts it.[2] The press sector from local, to regional and national levels, is today working within a market championed by digital intermediaries, who control their most valuable asset: the audience. Newspaper publishers in Europe have tried to adapt to these circumstances in mainly three ways: 1) Consolidating with larger media companies to reach scale; 2) Consolidating in a regional level as to attain a strong and distinct market position; 3) Focussing on local depth by tailoring content for a small audience. On a final note, especially local and regional newspaper publishers are in many instances facing greater consequences of technology companies entering the European press sector than their national and international colleagues due to their limited resources.[3]

Figure 1: Categorization of how smaller newspaper publishers have adapted to digitization.[4]

In 2002, Google released its news aggregator: Google News. It collects news from thousands of websites and presents it users news articles featuring a series of headlines, snippets and hyperlinks to the original content[5] based on computer algorithms[6] considering a variety of factors (e.g. authority of the source, keywords, users’ past activity and geographical location). Google News is a good example of the general dilemmas and conflicts that have emerged for newspaper publishers. On the one hand, Google News has been praised for its “expanding effect” making it easier for users to access and find news while driving traffic to newspaper publishers’ websites. On the other hand, opponents of Google News, typically represented by newspaper publishers themselves, are drawing attention to the “substituting effects” of Google News, as they provide snippets of news stories and thus, remove the incentive for readers to click on the original source.

It is for that reason that newspaper publishers put pressure on Google for a fair compensation for the usage of their content. They lobbied for the new EU Directive on copyright in the Digital Single Market adopted in 2019, obliging news aggregators to pay royalties for the content they show.[7] Germany, Belgium, France, and Spain had already regulated the activities of news aggregators, which allowed publishers to demand a fee from aggregators showing extracts of their content. Google refused to pay such a fee while investing resources to gain support from newspaper publishers.[8]

3.   The case of the Spanish press sector

In 2014, a reform of the Spanish intellectual property law established that firms posting links and excerpts of news stories had to pay a compulsory fee to the original publisher.[9] In response to this legislation, Google announced, the closing of Google News in Spain and removed all Spanish publications from its platform, explaining that the cost of the requirements set out by the new legislation would not be sustainable for them.[10] In the debate surrounding Google’s News in Spain, there was on the one hand the defendants, who argued:

On the other hand, the contestants of Google News in Spain argued:

4.   Other media sectors as inspiration for a new business model

Overall, we can find that there is the dilemma of data and the power it yields in the press market. Until now, newspaper publishers have mostly integrated data as means of measuring the performance of their content on different platforms, but this data is delivered by digital intermediaries.[20] Platforms such as Google and Facebook are reluctant to provide newspaper publishers with accurate audience data making it particularly difficult for them to strategically evaluate the various opportunities offered by news aggregators to amplify their online reach.[21] Consequently, European newspaper publishers find themselves searching for new business models.

A promising option could be to look for business models already successful for key players in music or film content (e.g. Spotify or Netflix: digital platforms charging consumers a subscription fee).[22] Additionally, there is a positive association between paying for many different types of online media and the willingness to pay for online news.[23]

For newspaper publishers, several possible issues could arise when changing business models, due to the risk of them becoming dependent on third-party providers. Firstly, an important lesson is to be learned from the music and film sector as third-party platform providers have led to a high concentration of power at the distribution level. Thus, if technology companies came to occupy digital journalism even more than currently, it is highly likely that newspaper publishers would face quasi-monopolistic structures at the distribution level. This could expand news deserts and technology companies would assume greater control on the sale of journalistic content. Secondly, a shared platform for journalistic content operated by a third-party provider would entail several disadvantages for newspaper publishers: 1) loss of a direct relationship with customers; 2) a decline in the single news brand’s value; 3) putting the gatekeeper and curator function at risk, which could increase the spread of filter bubbles.

Against such a backdrop, there is a way for newspaper publishers to avoid such a disruptive scenario: they could set up a collaborative platform uniting different outlets without the interference of a third-party platform provider (e.g. Readly, Pressreader).[24] In that case, data would be collected both centrally and locally. This solution could be especially beneficial for smaller newspaper publishers on the local or regional level, which have less resources and struggle to sell their subscriptions.[25]

[4] Note: Categorized strategies by local, regional, and national newspaper publishers’ in terms of adapting to the digital market. Reprint from Jenkins, J., and Nielsen, R. K. (2018). Reuters Institute for the Study of Journalism, Oxford University.

[8] Blecher, L. (2017, December 13). One of these projects was the Digital news Initiative aiming at “supporting high-quality journalism through technology and innovation”, involving €20 million of funding for innovation in news. Retrieved from  https://blog.google/around-the-globe/google-europe/digital-news-initiative-20-million-funding-innovation-news/

[15] News Media Alliance. (2019). The Effects of the Ancillary Right for News Publishers in Spain and the Resulting Google News Closure. http://www.newsmediaalliance.org/wp-content/uploads/2019/10/Final-Revised-Spain-Report_11-7-19.pdf

[17] Benton, J. (2019, January 22). Google is threatening to kill Google News in Europe if the EU goes ahead with its “snippet tax”.  NiemanLab. https://www.niemanlab.org/2019/01/google-is-threatening-to-kill-google-news-in-europe-if-the-eu-goes-ahead-with-its-snippet-tax/

[18] Cook, C. (2019, October 31). Why are we talking about reader revenues — and what you need to know. Medium.com. https://clare-cook.medium.com/why-are-we-talking-about-reader-revenues-and-what-you-need-to-know-5cd7cba334be

[19] Newman, N. (2017). Journalism, Media and Technology Trends and Predictions 2017. Reuters Institute for the Study of Journalism, University of Oxford.https://reutersinstitute.politics.ox.ac.uk/sites/default/files/2017-04/Journalism%2C%20Media%20and%20Technology%20Trends%20and%20Predictions%202017.pdf

*The White Paper is part of the Student White Paper Series on European Media Markets. It was written with further contributions by Dimitrios Bakoulis and Viktoria Petrova.


The Student White Paper Series is part of the European Media Markets course at the VUB. The course is headed by Prof. Dr. Marlen Komoroski & Pieter De Leenheer (marlen.komorowski@vub.be).

Photo by Bank Phrom on Unsplash