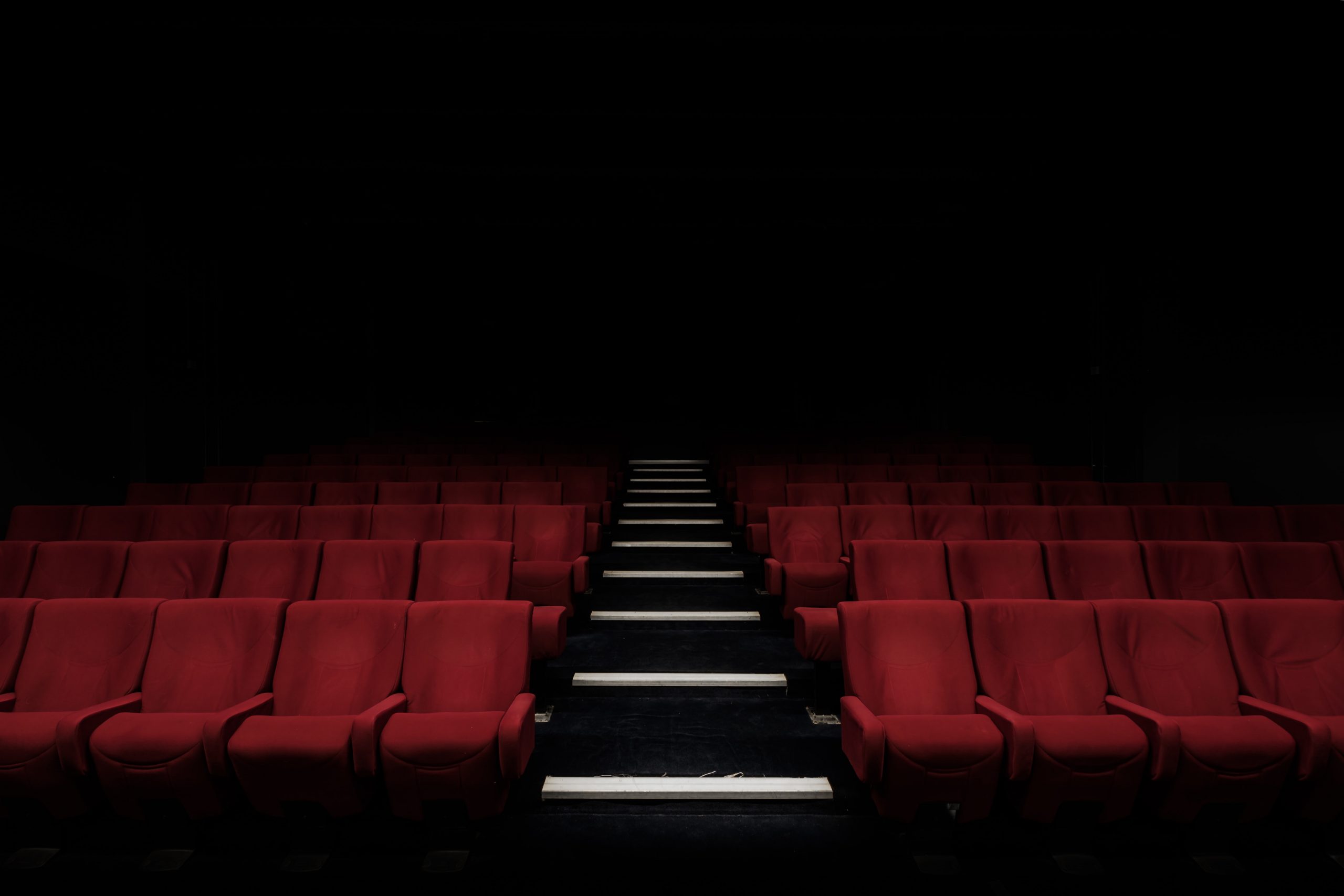 Although Europe has seen consistent growth in the number of films being produced every year, the EU film market is characterised by major structural challenges, hampering the industry from reaching audiences.[1] In recent years, we have witnessed a transformation in the film market including changes in traditional business models following rapid technological developments, the dominance of digital platforms, and the change in consumer behaviours. The biggest market disruptors, namely video-on-demand (VOD) services, have transformed the way film is distributed and consumed. In this White Paper, the current state and challenges of the film industry in Europe will be explored and analysed, particularly by focusing on film distribution.

1. Current state and challenges of the European film market

Based on the latest available data from the European Audiovisual Observatory, 2,421 films were produced in Europe, and 1,926 of these were of EU origin (2019). This marks a 6% increase from 2018 to 2019 and a 13% growth over 2015 figures. Despite the observable growth of European content, Europe’s overall audiovisual sector grew by only 0.2% between 2015 and 2019. Initial research by the Observatory on the impact of COVID-19 further suggests that the audiovisual sector lost over 10% of its revenues in 2020. Theatrical exploitation of films was most affected by the COVID-19 measures in 2020, as box-office earnings dropped by 70-80% throughout Europe.[2]

However, the film market, and audiovisual sector in general, were already facing slower growth figures and stagnation before 2020. One of the issues the film market faces relates to film distribution, which is regarded as an overlooked subject in Europe.[3] The European film market is characterised by substantial fragmentation, which creates barriers to effective distribution mechanisms:

For a long time, the standard way of film distribution has been established around traditional technologies and business models drawn upon fixed release window systems and exclusivity. The traditional film distribution model focuses on the lifecycle of so-called exploitation windows, namely adapting linear video content to numerous screening platforms for an exclusive amount of time and price, to maximize the value and revenue of a film’s intellectual property.[10] Following this logic, a film will be heavily marketed and released in cinemas, followed by exclusive licenses for circulation through other media outlets such as home video, premium TV networks, and Free TV networks. This strategy depicts the framework of a supply-led market in which independent film distribution was developed.[11] However, as already discussed above, the traditional models of film distribution are being challenged specifically by the emergence of VOD platforms.[12] Moreover, the closing of cinemas during the COVID-19 pandemic accelerated the changes to this traditional model.

As a solution to the disruption caused by lockdowns, some major US studios decided to release their productions directly on-demand, skipping the exclusive release to cinema (such as Marvel’s “Black Widow” and Universal’s “Trolls World Tour”). In the case of Universal and their “Trolls World Tour”, the film made more money in the first three weeks of online release than its forerunner did in five months at the cinema. Furthermore, distributing the film online led to 20% higher ticket sales in cinema than if it had only been released in cinemas, as initially intended. Because of this, Universal announced that they will release all their films online at the same time as in the cinemas. This came as a big shock to the already struggling cinema industry.[13]

However, when it comes to European cinemas, the situation differs from that of major Hollywood production studios. Without the support of a major studio or VOD distribution contract, most films rely on festival visibility and local cinema support, both of which were absent during the lockdowns.[14] Still, the European film market faces the same question: whether to distribute their films in cinemas and stick to the conventional release windows, to release them simultaneously on VOD and in cinemas, or solely on-demand.

Due to the challenges, European public bodies and private organisations increasingly seek new ways to overcome the issues European film distribution faces. This has led to financial and other forms of support. Examples are:

4. The future of European cinema and changing audiences

Even before COVID-19, the relevance of European cinemas was already under scrutiny. Theatre owners have expressed their concerns about the threat VOD providers pose to their business. Still, data from 2019 reveals that movie attendance was at an all-time high, with 39% more cinema admissions in Europe compared to 1999. 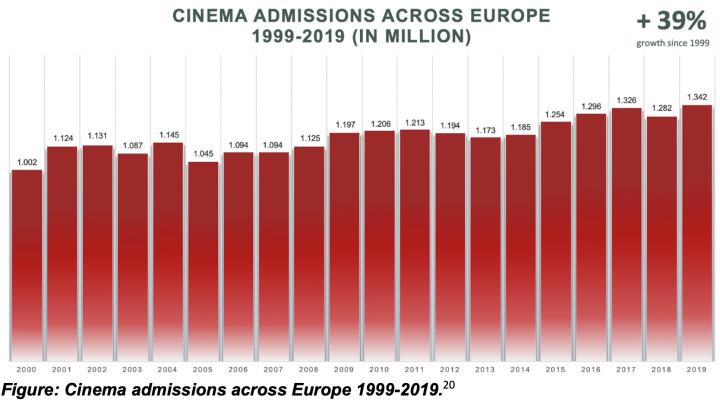 Experts highlight that, even though digitization has changed the way audio-visual content is consumed, audiences still appreciate the cinema experience.[21] Cinema First in a study from 2021 on cinema audiences in the UK highlight that “cinema is something that can’t be recreated at home, with two-thirds of respondents favouring the spectacular big screen experience, immersive sound, special effects, and access to a wide range of new films that only cinema can offer.” This shows how cinema is not just about watching a movie, but is seen by audiences as an experience.[22] On the other hand, research also shows that consumption patterns are changing, as audiences now often choose to stay at home and watch a film of their choice, at their convenience, on one of the many VOD platforms available, in order to avoid traffic and crowded places. Some also believe that the cinema experience has become too expensive to enjoy with the entire family.[23]

While the audiences’ point of view might vary based on their subjective perspective, we must consider the different market incentives for the different stakeholders in the film market. For example, it needs to be considered that a monthly subscription allows customers to watch everything they want for around 13 euro per month while cinema is based on paying per view.[24]

The European film market faces many challenges today. Specifically, the traditional film distribution model has been contested in recent years with a shift in the lifecycle of “exploitation windows”, through the rise of VOD platforms. Cinemas and film distributors in Europe have voiced their concerns about these developments. While audiences preferences for on-demand consumption vs going to the cinema may differ, film-makers and distributors are currently testing new business models. What will become the new “norm” is still to be seen, as is the impact it will have on the European film industry as a whole.

*The White Paper is part of the Student White Paper Series on European Media Markets. It was written with further contributions by Bibiana Kubota, Iullia Smagina and Camilia Ben Omar.

The Student White Paper Series is part of the European Media Markets course at the VUB. The course is headed by Prof. Dr. Marlen Komoroski & Pieter De Leenheer (marlen.komorowski@vub.be).

[Photo by Felix Mooneeram on Unsplash]